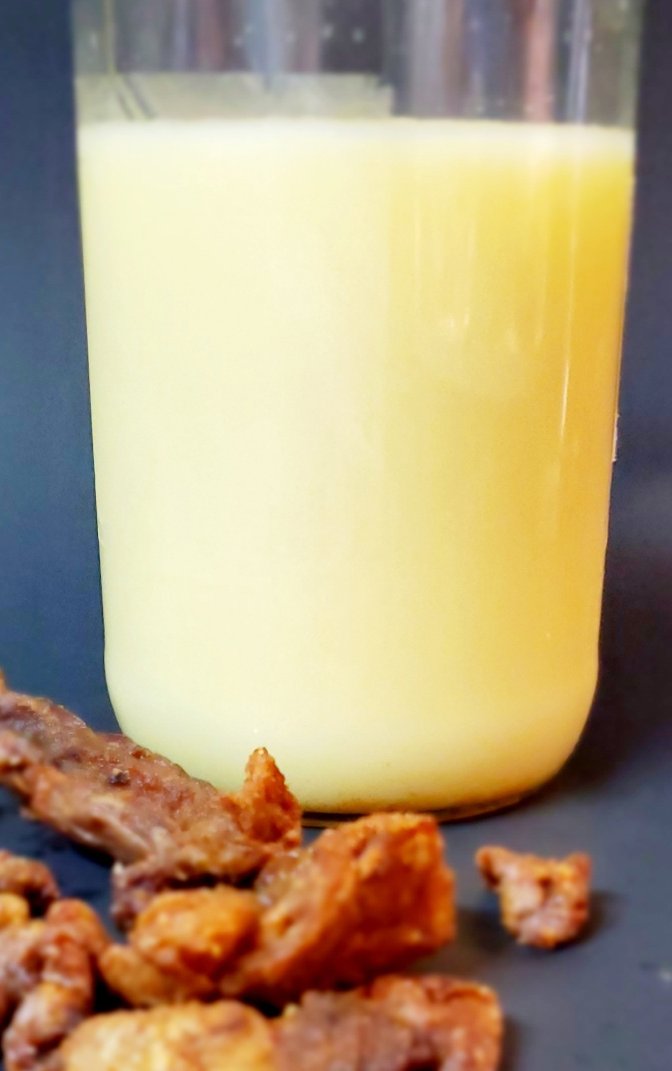 It’s that time again. I’ll be smoking a brisket this weekend and I decided to make some homemade tallow with the trimmings. Although, I don’t necessarily eat a lot of meat, I do have a fond adoration for certain types, this is one of them. So, as I’ve been smoking meats for a few years now, I’ve tried to hone my skills by studying up on it as much as I can. About a year ago, I noticed a champion smoker comment that she saves the fat. I initially thought, thats awesome! Don’t let any part go to waste. Then, I thought, my lord, for what???? What are you going to do with a bunch of beef fat?? I can only assume she uses it for tallow. Ever since, I’ve been freezing the trimmings. This week, as I was trimming my 15 lb brisket (4 lbs reserved for corned beef), I decided to go ahead and put it to use while it was laying on the cutting board. Several hours later and a little babysitting, I have about 2.5 c of beef tallow. This recipe does not require specific amounts of anything. Just a pot and some fat.

It’s much easier to do this in a wide shallow pot like a rondeau/brazier. I rendered the fat down in a deep stock pot and it took all day and night so, the rondeau is ideal.

Transfer all the trimmings to your braising pan and cook slowly over medium low heat. After a while, the trimmings will begin to crisp up. Move them around with a wooden spoon so the thicker piece can cook down easier. If some pieces begin to get too dark, remove them from the pan. When all of the trimmings have crisped up, remove them and place on paper towels if you intend on using them in cornbread or gravies. Use a metal funnel and ladle to carefully pour the liquid fat into a clean Mason jar. Some people prefer to use a strainer and cheese cloth to prevent “cracklings” from getting into the tallow, but I’m impatient so, I don’t.

I am a former professional chef, restaurateur, wine specialist and cooking class instructor. I have had the pleasure of working for many upscale restaurants under very prominent chefs as I worked my way to the top and began running my own kitchens and restaurants as executive sous chef, chef, and restaurant GM. I have helped build many restaurants and taverns as well as written award winning menus. My work has been featured in places like: Scene magazine, Houston Post and several Austin papers. I have cooked for politicians and celebrities alike as well as been a guest speaker at various culinary arts classes and taught hundreds of novice cooks and children how to create beautiful dishes and the right tools to use. View all posts by girlcheftastes